Stripper poles, Chinatown and Hickeys…NYC has it all!

Posted on April 12, 2011 | 14 comments
We spent a big portion of our NYC trip on the subway.  While Mr. Pavlov and I consider ourselves experienced subway surfers (thanks to the years we spent living in Washington D.C.) our kids are relatively subway newbies.  Especially the youngest.  To him the subway was pure entertainment.  Whether testing his balancing skills or his speed at maneuvering through slamming doors or perfecting his climbing techniques, the subway was his new urban playground. He was uninhibited and loving life.  These are just a few quick glimpses of our daily rides: 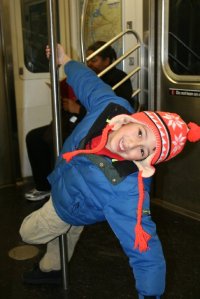 See what I can do on a near empty train?!

Then he did this and said…..

Ok, my mind was racing.  What could he possibly be referring to???  What had he seen? Maybe he watched a documentary on female firefighters.  That’s possible right?

Just as I was convincing myself that he was most certainly referring to female firefighters, he busted out some killer stripper pole moves that even gained the attention (along with a few raised eyebrows) of the normally indifferent NY subway commuters.  I glared in the direction of Mr. Pavlov who shrugged [too quickly] in innocence.  He looked guilty to me.  I inquisitioned him and the lil’ pole stripper later only to discover that the guilty party was America’s Funniest Home Videos!

Our Chinatown stop arrived and the subway striptease came to an abrupt end.  Chinatown is a unique world with sights, sounds and people that you just have to experience.  Whether a white rapist van filled with smoke and Jamaicans yelling “Ehh, blonde, blonde c’mere me want’ta tell you someting!” or the various animal parts hanging in shop windows, Chinatown is an auditory and visual trip!

Thankfully, I had my camera hanging heavily on my neck and here are a few sights: 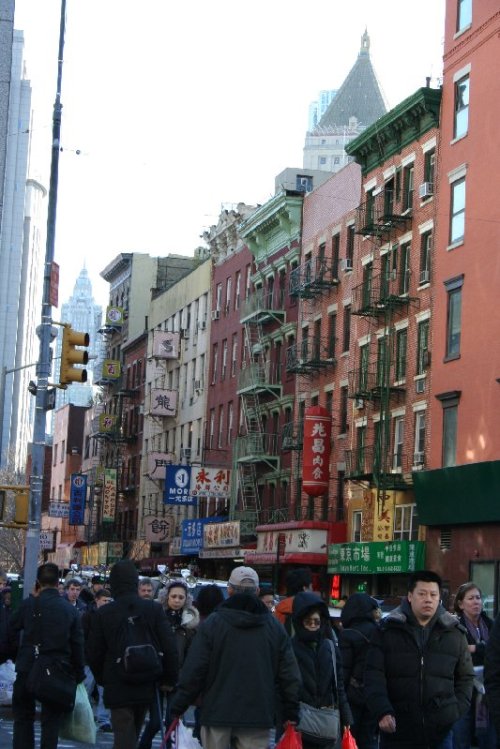 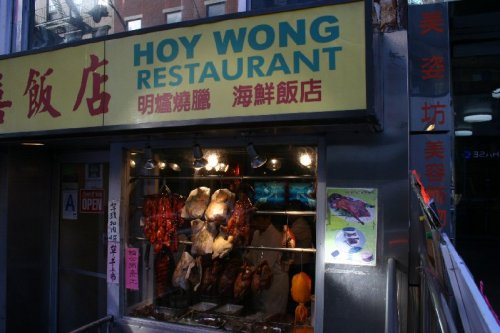 What in the Hoy is Wong?? 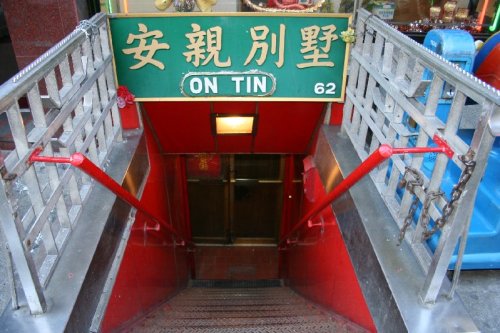 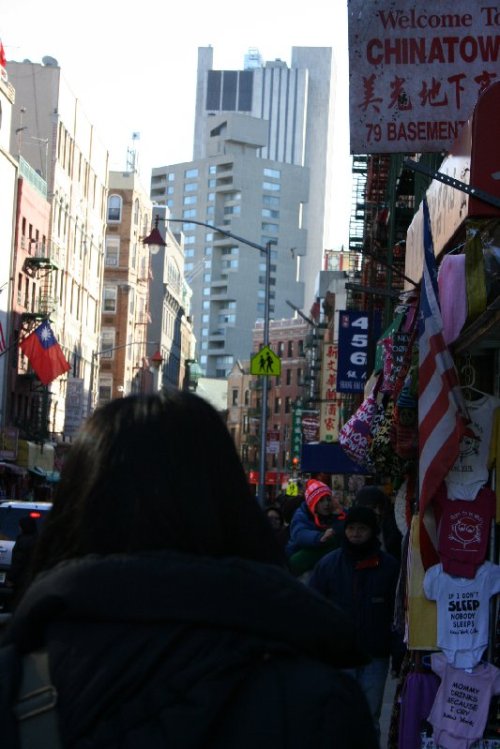 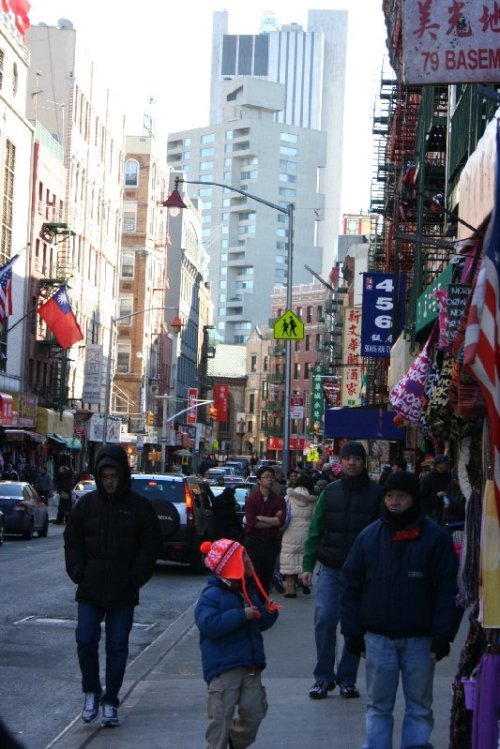 His NYC Indian Name: "Loud Orange Hat" (we bought that color for a reason) trying to strike up a conversation with a random man. 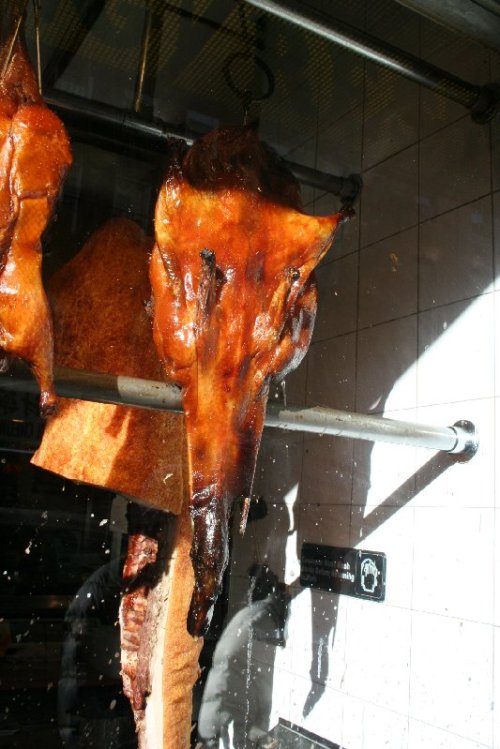 What critter can we eat??? 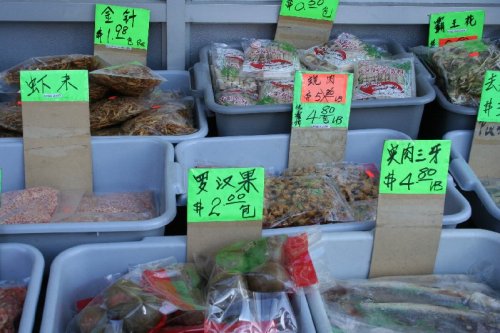 To a boy everything is a cool experiment

If your aura is somewhat altered after all of these unusual sight and sounds then, believe it or not, Chinatown has just the fix.  Had it not been for Marianne, a blogging buddy of mine over at comedyoferrers.com I would not have had any idea about fixing your aura or what this next photo was for.  Thankfully, Marianne made this comment recently on my Only a Boy post:

There is a massage acupuncture thing called cupping where they put suction cups on your back to clear your aura of stuff. I tried to hide it from my husband and was unsuccessful. His question: How much did you pay for someone to do that?

When I saw this little gizmo staring back at me from a shop window, I immediately remembered Marianne’s comment and chuckled.

I considered purchasing Mr. Hickey maker but a few things stopped me:

The aura machine remained in the dirty window while we headed to the subway.  Tres played stripper again during the ride back to Manhattan but somehow, in light of everything we saw, it didn’t seem so bad.

Posted in My family, Travel

Blame it on the Boys!!

Oh, I forgot…did I mention that the L’oreal self tanner stinks?  Most bottled tans do so I was not surprised however, what I was not prepared for was the Neutrogena spray self-tanner.  We used this one as well and turned our bathroom into a thick foggy chemical haze.  It was bad.  When we were done the floor had a sticky residue that even freaked out the boys who usually bring the disgusting into our home and are phased by very little.  When I woke up the next morning and walked into the bathroom I ran into a wall of stench.  It resembled urine and could easily be blamed on the trigger happy males in our home.  However, being mature and responsible  having used self tanners before I knew immediately that this smell was from the chemical in a bottle tan.

Enter daughter:  “UGH! MOM, The bathroom smells like pee!”  Fighting the urge once again to blame it on the boys, I explained that it was from the spray tan haze we created and that I used Clorox on the floors.  It should get better.

12 hours later:  The smell is still present and even the boys are complaining.  The sink and every surface have been cleaned.  Clorox has been doing its thing on the floors yet the smell still lingers.

24 hours later:  Rotten, rank — the smell persists.  The youngest has a little Sponge Bob toilet seat (below) that he places on the big toilet seat when he has to poo and occasionally  it will get splashed with pee.  My daughter “Mom, I think it is his toilet seat.  It has to be!”  Low blow.  She tried to blame it on the boys?  Now, where would she get that idea?  I explained that on average there is more nasty on the main toilet seat than his little seat and that it would take a whole lot of gross to stench up the entire bathroom.  So we concluded that the self tanner has to be on the walls, the woodwork, the shower curtain and the bathroom curtains.  Like an alien life form it has permeated our living space and is sinking into the pores of our home.

Today:  The washing machine is groaning as it runs full speed. I have vowed to eradicate this urine-mimicking chemical from our home.  and if all else fails I can always blame it on they boys or take the high road and pin it on the Sponge Bob seat!

Posted in My Tales, The kids

Pumpkin, Carrot and other varieties of ORANGE!

The reason?  Well the L’oreal sublime instant bronzer turned my beautiful daughter carrot orange.  Darn, I wish I had pictures but no joke…she was a pumpkin!  My little pumpkin, literally.  Her color was harsh and the natural light outside almost made her appear neon flourescent!  Worse than the chicks on Jerseylicious — yes, that is possible believe it or not!  However, she did not find her new color amusing and spent over an hour in the shower scrubbing herself raw while I laundered our stained clothing.   I did not have a dramatic color change like she did because after one application (she used it for two days in a row) I could see the tale-tale signs that Peter Cotton Tail may be hopping down my bunny trail!

Yes, the L’oreal self-tanner is instant as it claims and gives color within 24 hours but it is difficult to use, is prone to streaks and orange clumpish spots and stains anything within reach even though it claims to be a no transfer product.  It is also sticky and stinky.  It smells of chemicals like most of the bottled tans.  Products like it are the reason why I convulse and wrinkle my nose at the mere mention of self-tanners.

BUT the Coppertone lotion is white and creamy like regular lotion.  It does not stain, does not transfer, does not streak or clump and takes the win hands down.  The Dove lotion is also fab but it takes a little longer to work.  Which reminds me that these lotions take at least a week to build any resemblance of color.  Although after being turned into a pumpkin I’m sure my lovely girl would welcome gradual!

A ton of sparkles – although not so evident in this photo

Just a short review 24hr after using the L’oreal sublime instant bronzer on my pale, milky body.  Well, it does give color!  However, you must watch out for color clumps, massive callus, cuticle and under the fingernail uptake (making these areas freakishly dark) that plague most self tanners.  You really have to WASH your hands well – like scrub the skin off well!!!  Also, the “bronzer” means it has sparkles that will give you a Twilight Vampy appearance when you hit sunlight – above and below.

Sparkles where sparkles shouldn’t be

I haven’t noticed this problem with the lotions.  They are more subtle but also take at least a week to give color.  With the instant Bronzer I awoke transformed into a lovely somewhat tan specimen with sparkling skin.