A Chad, a cog or just happy to be in the alphabet somewhere?

Chad, cog or somewhere in the alphabet?

I was talking to a friend yesterday who mentioned some frustrations he was experiencing at work. After listening to him I replied, “Chad, cog or somewhere in the alphabet?!?”

He knows the analogy I was referring to so he smiled. Let me share with you.

It’s well known that I work in the medical field. In traditional medicine, physicians hold most of the influence and power to achieve change. Although, with the direction health care is moving in, the influence the physicians hold is becoming less (thanks to big business mindset and insurance companies).

So while I write this from a physician/mid level/patient relationship know that it can be applied to any professional or life situation.

There’s this orthopedic surgeon who is one of the absolute best in his field. He routinely takes on the impossibly difficult cases with great success. He has a physician assistant named Chad who is his clinical right hand (trying really hard to prevent sexual innuendos but this paragraph will be challenging), his partner, his go to. They are a dream team and flow effortlessly together. And as a patient you know this because not only do you observe how well they work together, but surgeon boss man informs you that you will see him initially, during surgery and then from that moment forward you will see Chad. In laying down the law or ground rules you quickly realize he values Chad. He respects Chad. And ultimately he trusts Chad. Therefore, so do you. Chad shows up every single day and kills it. Well hopefully not actually KILLS IT but he delivers! Surgeon boss man has switched hospitals multiple times and he always negotiates Chad in his deals. He has Chad’s back and Chad has his. They are a unit and it is undeniable. No doubt this professional relationship took time and work and patience.

A cog. We all know them. Maybe we are them. They show up. They work (or attempt to.) They do what needs done to keep things functioning but don’t go above or beyond the bare requirements. Basically they are just filling in the gaps to keep the machine running….a cog in the big corporate wheel. Their place could be filled by anyone and quickly will after they leave.

Somewhere in the alphabet. These people have given up on any professional excellence and count down the days to payday and ultimately retirement.

A Chad, a cog or just happy to be in the alphabet somewhere?

Being a Chad in Aesthetic Medicine

And I can’t say I’m sorry to see you go.  In fact, I thick my foot got prematurely lodged in your backside trying to hurry the process along.  I will spare you glorious readers the “Oh how my year sucked” details but here is one highlight.

My knee decided it no longer wanted to straighten.  I know, insane right?  A hinge joint deciding it no longer required to comply with the anatomical rules of operation.

But nonetheless I found myself in the ER (above) with a stubbornly flexed knee.  After two ER docs and about 10 ortho residents and a few fellows had their manipulative way with me, I was told to follow up with the Attending surgeon.

Much to the disappointment of all the young ortho bucks, I guess the attending would get to be the one to exercise his virility and unlock the beast.  But I would like to thank a particular ortho resident.  His extremely hairy chest and gold chain beating on it with each forceful manipulation helped to momentairly distract me from the pain and I’m convinced, kept me from passing out.

I mean first, that much chest hair? Not my thing.  And secondly, how in the heck could that chain beat so freely and with such force without getting caught in all of that bush?  It was truly fascinating.

Clearly he was unaware of my voyeuristic activities or the fact that he was grunting and sweating.  I can only imagine what the scene looked like from another angle.  It would have been comical had I not been every shade of the rainbow and about to vomit from pain.

But enough about hairy chested residents.  My temporary ride above sucked and I gained new appreciation for my legs and for the support of my family.  My daddy (above sporting the look of worry) is truly a one-of-a-kind wonderful man and second to none.  He has always been my hero and I shadowed him relentlessly as a kid and would probably continue to if it wasn’t so creepy.   But let’s face it, good men are worth shadowing.

It was love at first perma skin mark between me and the ortho attending.  He had me at “GA Yes.” Rather than spreading my legs and contorting me into the various pretzel formations that his younger, inexperienced counterparts attempted, he decided to give me good drugs and take care of business arthroscopic style.  And the fact that he marked the correct body part to invade was a huge bonus for this girl.

Someone should’ve told anesthesia to keep the good drugs running because when I finally came to pain had been playing on my playground for awhile.  And anyone who knows anything about pain knows that once it gets ahead of you it is game over…pack your bags….time to find a drug dealer and shoot up heroine. 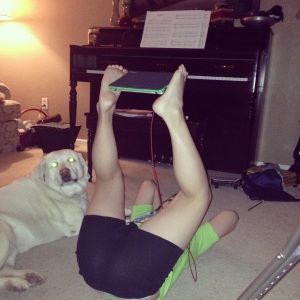 I spent much time on the couch during my recovery.  And as all mothers can confirm, our children are never far away.  I’m extremely thankful for the rare occasions that I’ve been able to poop in private.  In fact, my bowels literally shut down when there’s not a kid competing for attention.  We’re taking full blown constipation until a child returns to get things jump started again.  I think I’ll require bowel retraining when they all leave for college.

During one of my many moments on the couch I happened to look over and there was under ware clad Tres lighting up the room with his moon.

“Laughter doeth good like a medicine” (Prov 17:22) and I had much medicine that day.

2015, you’re starting off with some baggage but I believe that you have the makings of greatness in you.  So goodbye 2014, don’t let my foot cause you too much discomfort on the way out….hello 2015!

Ok, so how many of you were skeptical at the last post where I excitedly announced that I would be a working 9-5 Dolly (my chest wishes) ?

Well, you guys were right.  My hours are no where near those of Dolly’s. After working in the medical field for as many years as I have, I knew that sadly my hours would be like my bra size….not even close to Miss 9-5 DDD Dolly.

The hours are often long and I use way more brain cells than I was allotted at creation.  After these long hours, I enter the door to my home dehydrated and exhibiting signs of low blood sugar.  I am mauled by my children (wait, are these wild creatures my children?) tackle style as I attempt to drag them and my pathetic body up the stairs where I guzzle water (or whatever beverage I find lingering on the counter) a little too quickly and either choke or get abdominal spasms. Then I sit with a glazed over look as drool threatens to escape and utter random “um-mmms, uh-huhs, ohs, huhs” as they competitively machine gun chatter about their day.  Eventually, these ferrel beings get fed by the flat chested Dolly zombie, unless Mr. Pavlov fed them first.  On the days that Mr. Pavlov beats me home, a spark of life returns to my corpse as I realize that I don’t have to spend another dreaded second in the kitchen ruining food and calling it a meal.

So blogging has become a fuzzy recollection.  Maybe even a figment of my imagination.  I mean, I think I blogged.  Or did I?

Yep, that’s right.  I went back to work, real work that is.  My previous gig for the past 3 years was a frightening combination of Third Reich Nazi Germany meets Children of the Corn.

Originally we placed the kids in this particular private Christian school with the hope of receiving both a stellar academic curriculum as well as grounded values.  I, therefore, agreed to manage the health room (for just enough pay per day to buy a Grande Latte) and the school agreed to knock off a small portion of the tuition for our three kids.

Three years later, survival mode fully functional, we were found running and screaming (and maybe blowing a shofar) from the institution.  We nearly escaped with our sanity intact and our souls were surely damned to hell (if it wasn’t the frayed jeans my kids wore then surely my nasal piercing sealed our fate).  We have not looked back once (I learned this valuable lesson from Lot’s wife).

As I was licking my wounds and detoxing from the poisoned environment that tried to kill us all, a wonderful opportunity knocked at my door ( I also learned that when someone stands at the door and knocks, you should let them in).  I swung the door wide open and the blessings began to pour in.  The three years of hell are now a disturbing memory of the past.  Although I must admit I twitch a little when I hear the name Malachi mentioned.

I am loving every minute of this new position that I work in as a Nurse Practitioner with a cardiac Electrophysiologist.  I had some experience in this field previously prior to the toxic, cult-like school position.  I continue to build upon the previous foundation with an awesome Physician mentor.

So, my friends, I may be scarce in the postings but please continue to visit.  I promise I will continue to write.